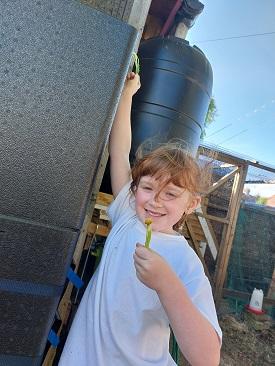 Every little helps when it comes to saving the environment as Rosemary Russell from Doncaster is keen to prove!

Her family is one of the winners of a competition that saw seven, high-speed, state-of-the-art Hotbin composters given away by Waste Less South Yorkshire, a leading environmental group which is supported by local councils and the Renewi organisation.

Hotbins can transform garden and food waste into a top-quality fertiliser for plants and vegetables - suppressing plant diseases and pests and reducing the need for chemical fertilisers - in as little as 30-90 days.

Rosemary’s dad, Ben Russell from Wheatley, Doncaster said: “We are keen recyclers and have been composting for a while now. It is a brilliant way of teaching our children about the environment and waste.

“The Hot compost bin has made it more fun, and we're looking forward to doing more vegetable growing now we are getting our compost quicker.”

Composting for just one year can save greenhouse gases equivalent to all the carbon dioxide produced by a kettle for one year, or a washing machine for three months.

Abi Reid is Community Education Liaison Officer based at Manvers, the award-winning waste treatment facility at Manvers which diverts 97 per cent of Barnsley, Doncaster, and Rotherham household waste from landfill.

“It is great to see young people like Rosemary being encouraged to get involved in environmental projects. Seeing food and garden waste transformed into something useful, rather than thrown away, is a positive example of what can be achieved – even in our own back gardens,” she said.

“We know many people are trying to reduce their carbon footprint, and home composting is one way of doing this and can save people money on fertilisers for the garden.

“This is the third year we have run the competition which has become very popular. In previous years we have given away three Hotbins but this year we increased it to seven. We are looking to run the competition again later in the year so if you didn’t win a Hotbin this time you could be in with another chance.”

For more information about composting and how to get started you can visit the Waste Less South Yorkshire website at wasteless-sy.co.uk and campaign posts can also be found by searching #SouthYorkshireComposts on social media.

Compost bins can be bought at supermarkets, garden centres and online.

Note to Editors:  The waste treatment facility at Manvers processes around a quarter of a million tonnes of leftover waste a year from 340,000 homes across Barnsley, Doncaster, and Rotherham, turning it into useful products rather than sending it to landfill.

Picture details: Rosemary Russell from Doncaster keen to get started with the family’s new Hotbin composter won in a competition organised by Waste Less South Yorkshire.

For further information contact Abi Reid or Rebecca Wilson on 07814 302297 or abi.reid@renewi.com or rebecca.wilson@renewi.com